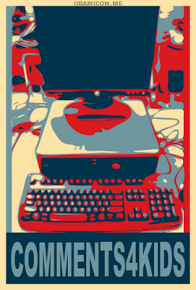 Henry is a student in Mr. Huebl's class in Adelaide, Australia! The post on Henry's blog I read was If we share.... The blog post is a poem Henry wrote about sharing, and how if more people would share what they have, then the world would be a much better place! It's a nice poem, and you should give it a read!

In my comment, I said that I really enjoyed reading his poem. I've always loved reading and writing poetry, and that it would be great if people learned how to share their resources more. You can make a lot of friends by sharing, plus you can help out those who are less fortunate than you are.

Sam is a student in Ms. Lentine's class, and the post of his that I read is titled Larry and Tracy. In his post, Sam talks about a documentary, called Wretches and Jabberers, that his class watched about two autistic people named Larry and Tracy. Sam summarizes the documentary, explaining that Larry was born in the 1950s and was institutionalized, and Tracy wasn't given the opportunity to have a good education when he was young. However, in the 1990s, someone came up with a way for autistic people to communicate through typing, which helped people understand more about autistic people.

There were two other kids whose blogs I left comments on, but the file I saved their links in seems to have been deleted, and I could not find the blogs again. I take full responsibility for this, and I sincerely apologize.
Posted by Becca "Riley" Lathem at 12:33 AM