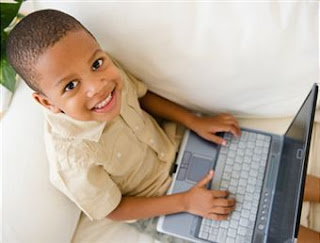 This week, we were assigned to watch a video by Ms. Kathy Cassidy, as well as a Skype interview between her and Dr. Strange. The video we watched is called Little Kids...Big Potential. In the video, we see pictures and video of Ms. Cassidy's students using the technology they have available in their classroom. First, we see the kids working on their laptops, and the child narrating tells us about how they all enjoy writing on their blogs. People leave them comments on their blogs, and they really enjoy seeing people's comments. The students also explain that their writing skills increase every time they post to their blog! One student makes a point that when you comment on people's blogs, you should never say anything mean. You should always be nice and stay positive when commenting, and that's great advice to follow!

The children also talk about how they use their class website as a central hub to find and pick sites that will help them learn about things like numbers and the alphabet. They do this during a set time during class, and they go to the class webpage to choose what they learn about. Another tool they use in the classroom is a wiki page. They asked for help from others to learn about different topics, like traditions and rituals. People added to the class's wiki their own examples of traditions and rituals, which helped the students learn about them. When the kids made a wiki about the alphabet, people from Alabama made videos and uploaded them to the wiki for the children to watch! Skype is another tool the children use often. They use Skype to talk to students at other schools, as well as experts in certain subjects! I have to admit I was thoroughly surprised when the children introduced their Nintendo DS systems as something they also used in their classrooms. I never really considered that the handheld gaming system could be used in classrooms as an educational tool, but the children talked about how they used them to play NintenDogs! They played the game to help them learn how to read. They also state that using the Nintendo DS has helped them become better problem solvers, and they've learned how to share.

We were also instructed to watch this Skype interview between Dr. Strange and Ms. Cassidy. When asked how she first got involved with technology and how long she's been doing this, she stated that she got involved with technology about 10 years ago because she had suddenly been given 5 computers for use in her classroom. She explains that she's actually had her class blog for 5 years at the point the interview took place. She also explains that she takes security measures to protect her students identities when they post on the internet, and parents are actually very excited and appreciative of their kids using the internet because they get to directly view their children's progress.

I think what Ms. Cassidy is doing is great! I think it's important to introduce kids to technology as early as possible. Even as kids they can learn so much from technology. I think it's neat how she created a class webpage with links to all kinds of games and learning exercises that her students can choose from. Giving them the freedom to choose which games they play to help them learn is such a good thing because it teaches the kids independence, but it also gives them the opportunity to show they can be trusted to use technology appropriately. That's definitely something I'll use when I become a teacher. I can create a class blog or webpage where I post assignments, and I can post links to useful websites. Since I'm changing to Spanish as my concentration, I could even use Skype with my students to talk to native Spanish speakers so my students can hear how it is spoken by someone for whom Spanish is a first language. Of course, there would be some obstacles I might face when using the internet in the classroom. I'll have to make sure my students understand that during classtime, checking Facebook or Twitter isn't appropriate unless I've given them a specified time in which they can do so. But I feel like I'll be able to trust my students, for the most part. As long as I show them I trust them and respect them, I'm sure they'll show me they can be trusted.
Posted by Becca "Riley" Lathem at 11:31 PM