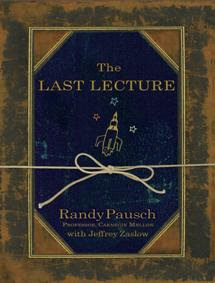 This week, we were assigned to watch Randy Pausch's Last Lecture: Achieving Your Childhood Dreams. Pausch begins his lecture right away by "introducing the elephant in the room". Right off the bat he explains his current medical condition, showing pictures of his latest CAT scans and saying that there are about 10 tumors in his liver. He further explains that his doctors have given him 3-6 months of good health left. He talks about it so matter-of-factly, saying "it is what it is" and that he can't change it. I love that he maintains happy spirits and a good outlook on it overall. He makes quite a few jokes about it in his introduction, so it definitely helps lighten the mood.

The first technique Pausch talks about is fundamentals. He begins my explaining that one of his childhood dreams was to play in the NFL. But he did play football as a child, and Pausch tells the story of his team's first day of practice. His coach showed up without any footballs, and when the kids asked why there weren't any footballs, the coach explained that they were "going to work on what those other 21 guys [who aren't holding the football] are doing". What his coach meant by that was that they were going to work on the fundamentals. Pausch iterates how important it is to learn the fundamentals of whatever subject you're teaching. Pausch further explains that if people stop trying to correct you when you've messed up, it means that they've given up. As a teacher, it's going to be important for me to never give up on my students and to always help them learn from their mistakes. Even as just a student here in EDM310, every week we're assigned a fellow student to leave a comment on their blog, and in the process, we learn to give constructive criticism, a skill that will be extremely beneficial when we become teachers.

The second technique Pausch discusses is leadership. He gives an example of another childhood dream he had: meeting Captain Kirk. Captain Kirk, as any Trekkie can tell you, is the captain of the starship USS Enterprise in the Star Trek series. Pausch explains that he sometimes wondered what skill set Kirk had that allowed him to be a member of the Enterprise crew, but then he realized that Kirk harbored the skill of leadership. As a teacher, I will be a leader for my students. Not only will I be a leader to them in the subject I teach, I will also be a leader to them in teaching them to learn the new technology that will affect us in the future. So as a future leader, I have to educate myself on the current technology being employed in classrooms now and prepare for the future of technology.

Another point Pausch makes is that there is a good and bad way to say "I don't know". There was a time when he had the opportunity to work with the Disney Imagineering team, a dream he had since childhood. He went to have a meeting with a Dean at the University of Virginia, and the Dean wasn't happy that the Imagineering team would own the rights to the intellectual property of the paper Pausch was going to help them write. The Dean threatened to call the deal off unless that clause was changed. Pausch asked the Dean if he thought this whole thing was a good idea, but the Dean said, "I don't know!" So Pausch instead went to the Dean of Sponsored Research. Pausch asked him, "Do you think this is a good idea?" The Dean's answer, paraphrased here, was, "I don't know if it's a good idea, but you're excited, so tell me more." One of our mottoes here in EDM310 is I don't know. Let's find out. And that's a motto I want to have in my future classroom. If I'm ever asked a question I can't answer by one of my students, I'll make sure we find out the answer together.

Pausch also tells us of a time when he started a class called Building Virtual Worlds. The class was made up of 50 students from different departments, like drama, art, and design, and they were randomly put into teams of 4 to work on projects every two weeks. After the first project, Pausch explains that he was absolutely blown away by what his students did, and he had no idea what to do next. So, he called his mentor, Andy van Damn, who advised him to go to class and say to his students, "Guys that was pretty good, but I know you can do better." His point was if you don't set a clear bar for your students, they will continue to surprise you and keep getting better. As a teacher, I can't expect my students to do their best if I set limits. Creativity doesn't flow well when it's pressed behind limits.

An important point Pausch gives about 52 minutes in is that the best gift an educator can give is to teach their students to be self-reflective. That's something Dr. Strange is teaching us to do here in EDM310. There are no grades. We give ourselves what we think we deserve. We have a checklist that we fill out ourselves and check tasks off as we complete them. During the course, we are to reflect on our work each week and see how we can improve. At the end of the course, we will evaluate our own performance and work in this class. When I become a teacher, it will be important for me to teach my students how to engage in self-reflection. As the saying goes, you are your worst critic. If you can learn to reflect on your work and make judgments on how well you're doing, you're going to be better able to learn and grow.

The last thing I want to iterate on is how, throughout the lecture, Pausch keeps bringing up that "brick walls let us show our dedication". When we run into obstacles, what really defines us and our ultimate success is how we deal with and overcome those roadblocks. When you're faced with an obstacle, you can do one of two things: give up or find a solution. And the people who choose to persevere and find a solution are the people who will do great things.
Posted by Becca "Riley" Lathem at 8:48 PM