I'm a Papermate. I'm a Ticonderoga. 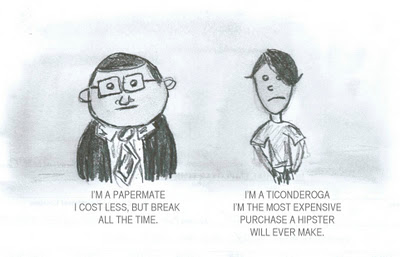 This week, we were asked to take a look at the above comic by John T. Spencer. The comic was posted to his blog Adventures in Pencil Integration. This comic is a parody of all those PC vs. Mac commercials you see on television. For any of you reading that might be having a lapse in memory like I did, Papermate and Ticonderoga are both companies that make pencils. In the comic, Spencer is comparing Papermate to PCs and Ticonderogas to Macs. Papermates are more affordable but they "break" often, according to the comic. Ticonderogas are more expensive but are supposedly of better quality. I personally used a lot of Papermate brand pencils in my time in school, and I never had any trouble, but again, this comic is a parody. So to each his own I suppose!

Why Were Your Kids Playing Games?

We were also assigned to read Spencer's post Why Were Your Kids Playing Games?. I've got to admit that I didn't catch on to the point of the post until about half way in when I read the line "Do you remember what I said after the Hang Man Fiasco of 1895?". In the post, a teacher named Tom is called to the principal's office and scolded about playing a game with his students. Tom tries to explain to the principal that the game he was playing was teaching his students an important lesson, and that his students were engaged in the activity. However, the principal refuses to listen and shows more concern for the students making high scores on the "rote memorization test". The principal tells Tom that if he wants to "abandon slate-based learning" that Tom needs to at least try some worksheets or algorithm packets.

From what I can tell, Spencer's post is a parody of technology integration in our schools, as well as commentary on how it seems like a lot of school administrations are still focused more on test scores than actually teaching their students what they need to know. As Dr. Strange puts it, so many schools these days are still relying on "burp back" education. There are also too many schools who still haven't made any progress in integrating technology into the classroom. People are so afraid of change that they'll work hard to resist it, even if said change is actually a good thing and would make things much better! Because of this, many teachers who try to advocate for change and more technology integration are met with disagreement, and we need to fix this. Yes, it's hard to change from something you've been doing the same way for decades or even centuries, but it's time for a change, and technology can do wonders for us and our students.

Another brilliant post I read from Spencer's blog was 10 Points on Pencils. The post basically addresses the issues many teachers and administrations have with the integration of technology into classrooms. Except for his post, Spencer replaces modern technology like tablets and cell phones and computers with paper and pencils. It's quite humorous but also very witty. I love his use of sarcasm and how he talks about using paper and pencil. It really sounds like he's a teacher from the early 1900s advocating for change to move away from slate and chalk to paper and pencil.

Our other assignment for this week was to read Don't teach your kids this stuff. Please? by Dr. Scott McLeod. Dr. McLeod is an associate professor at the University of Kentucky and the founding director of UCEA Center for the Advanced Study of Technology Leadership in Education (CASTLE). The post is a poem written by Dr. McLeod. The poem uses heavy sarcasm, telling teachers, parents, and administrators to not teach their kids and students about technology. In the poem he sarcastically points out that technology is "evil" and only teaches kids how to cheat. Basically, he mocks the idea that children only use technology in bad ways, like for watching porn and for cyberbullying. At the end of the poem there's a break in the sarcasm, and he snidely point out that he will teach his students about technology and that they'll be way ahead of the game in the future, compared to the students and kids whose parents and teachers refused to teach them how to use technology.

I think his post was absolutely brilliant. I can really appreciate someone who uses sarcasm productively and efficiently, and Dr. McLeod accomplishes both of these things in his post. I agree that schools are so quick to demonize technology and assume the worst in kids when it comes to using technology. Yes, bad things on the internet do exist, but we can't just automatically assume that our students will use technology irresponsibly. If we don't give them a chance to be responsible, they'll never learn to be responsible! We have to allow our children and students to exercise responsibility. We have to be able to trust them. Yes, they're going to make mistakes. We all make mistakes. It's part of human nature, but we learn from our mistakes, and that's exactly what our students will do. They'll also learn from their successes. But first, we have to learn to let go and let our students fly because if we don't, we'll only hold them back.
Posted by Becca "Riley" Lathem at 9:40 PM