If I Built a School 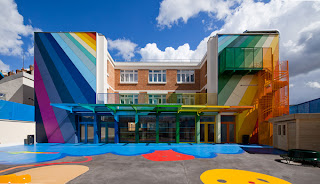 Krissy Venosdale's blog post If I Built A School describes how she would build a school if she were given the opportunity. The first thing she talks about is how there would be a huge neon sign on the school's door that says "Welcome: Now Entering an Innovation Zone". That's the first thing a child would see coming to school, and I believe that would be extremely encouraging. She also describes a library with a fake tree with a treehouse and a cafeteria modeled after a comfortable, modern coffee house. She explains that "grade levels" would not exist; there would be classrooms that children advanced through based on ability and readiness, instead of based on age. There would be a colorful bus available to take the children on all kinds of field trips throughout the year, and the front hallway would have a large bulletin board where parents and other people from the community can post thank you notes. She also talks about how, every afternoon, students would get their "20% time", during which they would attend special classes about an area they were interested in. Children themselves would even have the option to teach a class during this time. Laptops, iPads, and other technology would be used daily, and their use by students would revolve around trust and respect and knowledge on how to use them properly. She states there would even be an aquarium in the halls, and that state tests would be cancelled! Sounds like a great school to me!

If I was given the opportunity to build a school, I would put an emphasis on creativity and the arts. I don't think the arts are being taught enough in our schools today. Every classroom would be decorated with a different theme. For example, one classroom would be decorated with a space theme, while another would be jungle-themed. There would be computers or iPads in each classroom, and every teacher would have to be technologically literate or be willing to become technologically literate in order to be hired. Students wouldn't take tests. Instead, they would express their knowledge through both individual and group projects. After all, we should be preparing our students for the real world, and often times, people in the workplace have to work as a team to get things done! Oh, and I'd definitely like to have that library tree house, too.

Eric Whitacre's Virtual Choir is stunning and beautiful. The quality of the voices was absolutely amazing, and the singing gave me goosebumps! Before watching the video, it had never really occurred to me that the internet could be used in such a way. Just think of what else can be done based on the same principle! Someone could conduct a full concert of musicians from all over the world! Or someone could compose a song with voice clips sent in from other people. It's really amazing how much the internet has brought humanity together. If you closed your eyes while watching the Virtual Choir, you would have no idea that the people participating weren't all together in the same place. And I'm willing to bet that a lot of friendships were formed between the singers because of that project. So not only is the internet a central hub for data and information exchange, it's also a center for forming friendships with people around the world! Listening to the interview between TED Radio and Eric Whitacre honestly made me tear up. Whitacre explains that he got the idea from a young woman who uploaded a video of her singing the soprano part to a song of Whitacre's called "Sleep". After watching her video, Whitacre posted to his blog that he was looking for singers, and he posted a download to his song "Lux Aurumque". A man named Scott Hanes offered to be the one to put together and edit all of the videos. The finished product, which is linked above, is something you will surely never forget. I hope to one day be a part of his virtual choir!

Teaching in the 21st Century

In Teaching in the 21st Century, Kevin Roberts talks about what it means to be a teacher today, and I agree with every bit of it. The main point Robert makes is this: Teachers are no longer the main source of knowledge. We are the filter. Students have easy access to information nowadays through internet resources such as Wikipedia, Google, Facebook, and other websites. So if students want to know something, they don't have to go to their teacher and ask. They can just do a quick search on the internet! So, as teachers of the 21st century, it is not our duty to teach at them. It is our duty to engage them in learning using the amazing technology we have available to us. This means that we teachers definitely need to be technologically literate! Technology has become an important part of our daily lives. So it's important that we use it to engage our students in our classrooms.

Another point Roberts makes is that there is a stark difference between entertainment and engagement. He explains that entertainment is passive and allows escape from problems, while engagement is active and solves problems. Our job as teachers is to provide meaningful and powerful engagement to our students. When I begin my career as a teacher, I'm going to be teaching in a world that is very different from the world I grew up and earned an education in. So it's my duty to keep up with the advancements in technology and the other changes in our environment and adapt to it so I can better prepare my students for living and working in our ever-changing world.

The idea of a flipped classroom is something I had never heard about until now, but it's a very interesting concept! Dr. Lodge McCammon explains in his video what it means to flip a classroom. Basically, teachers create videos explaining the new content that will be discussed the next day in class. Students are expected to watch the videos and prepare questions and work on sample problems to bring to class the next day. This way, the teacher doesn't have to stand in front of the classroom and lecture the entire time. By watching a video at home the previous night, students have more time to ask questions and apply what they learned, and the teacher has more time to help them. In the video Why I Flipped My Classroom, Katie Gimbar, a math teacher, explains why she decided to flip her classroom. She explains that she used to teach to what she calls the "middle" group of students, as in the students who understood the content and moved along at a normal pace. This left the group of higher level students not being challenged, and the struggling students didn't get the extra help they needed. Only 10% of the class time was spent on application this way. Now, with a flipped classroom, the students can review the informational videos as many times as they need, and the teacher has plenty of time in class to help each group of students with any concept they're having trouble understanding. Ms. Munafo from Hilburn Academy Elementary also gives a good explanation of what it means to flip a classroom in this video.

A flipped classroom is definitely something I can use in my teaching! Ms. Munafo explains in her video that the flipped classroom is currently being used mainly for math, and since mathematics is what I'm specializing in, I can definitely make great use of the "flipped classroom" concept. Khan Academy has uploaded a lot of instructional math videos to their YouTube channel, and their videos are wonderful examples of how I could make and conduct my own videos for my students. Yes, this will probably be a lot of work, but it will help my students better understand the material and be more engaged in the classroom!
Posted by Becca "Riley" Lathem at 10:26 PM